HIGHLIGHTS OF THE YEAR

    The combined ratio improves in most regions, and in Spain in particular, to stand at 93.4 percent.

    MAPFRE grows by 4 percent in Spain, compared with a 0.7 percent fall for the market.

    VERTI Spain generates profits for the first time in 2017.

MAPFRE posted revenues of just under 28 billion euros for 2017, which represents a 3.3 percent increase over the previous year, while premiums grew 2.9 percent to almost 23.5 billon euros. The Group’s net profit was 701 million euros, down 9.7 percent due to the extraordinary cost of the natural disasters that occurred in 2017, with a net impact on earnings of 126 million euros. This does not include the cost assumed by MAPFRE RE since it is regarded as ordinary in its line of business.

“Very few companies are capable of absorbing such extraordinary catastrophic risk as we witnessed in 2017 into their results, which in MAPFRE’s case, consisted of handling two earthquakes and three hurricanes. Closing the year with earnings in excess of 700 million euros is clear proof of MAPFRE’s capacity and solvency. It also demonstrates the fruits we are reaping from our profitable growth strategy, which compensates for these extraordinary events,” said Antonio Huertas, MAPFRE’s chairman and CEO.

Business was particularly good in Spain, while reinsurance performed remarkably well, maintaining an excellent combined ratio (94.8 percent) and contributing 163 million euros, in spite of the impact of the catastrophes. Profitability also increased in Turkey, Peru, Colombia and Italy.

The combined ratio stood at 98.1 percent, with the positive performance in Spain and the regional areas of LATAM North and LATAM South being worthy of mention. Extracting the impact of the disasters, the combined ratio would be 96.9 percent, 0.5 percentage points better than the previous year.

Group investments totaled 49.8 billion euros at the end of 2017. The majority of these (55 percent) corresponds to sovereign debt, while corporate fixed income accounts for 19.2 percent, with equities and mutual funds accounting for 8.1 percent. It is important to underscore the quality of these investments, with 24 percent of the total holding a credit rating of AAA, AA or A, and 64 percent holding a BBB rating. In 2017, the Group also invested a total of 292 million euros in alternative investments.

At the end of September 2017, the Solvency II ratio stood at 189.4 percent, compared with 205.6 percent in June, with 93 percent high-quality capital (TIER 1). This decline is due principally to the redemption in July of the subordinated debt issued 10 years earlier. In this respect, it is important to note that the solvency ratio remains both robust and stable, thanks to a high level of diversification and stringent investment and management policies.

In 2017 the Insurance Unit booked 19.4 billion euros in premiums, up 3.7 percent on the previous year.

→ The Iberia Regional Area (Spain and Portugal) registered a 3.8 increase in business, with total premiums of more than 6.9 billion euros. Business was particularly buoyant in Spain, growing nearly 4 percent to 6.8 billion euros, while the market registered an overall decline of 0.7 percent. Spain’s combined ratio also performed well last year, falling by 0.8 percentage points to 93.4 percent. Automobile insurance grew by 3.2 percent to 2.2 billion euros and also experienced a significant improvement in its combined ratio, which closed the year at 90.8 percent, 6.5 percentage points lower than the previous year. General P&C increased by 2.8 percent to almost 1.7 billion euros, while the Health and Accident line registered growth of 4.7 percent, with premiums closing the year at 549 million euros.

2017 was the first year that VERTI generated profits in Spain, on premium volume of 75 million euros from more than 260,000 clients.

MAPFRE VIDA recorded a 4.7 percent increase in business with premiums of more than 2.2 billion euros, contrasting with the negative performance (-5.6 percent) of the market. Driven by the bancassurance business, this growth was particularly significant in view of the low interest rate environment that characterized the entire year. Mutual funds grew by 15.3 percent (almost 500 million euros) to 3.7 billion euros, while pension funds rose 8.5 percent (nearly 400 million euros). Equity stood at 5.1 billion euros at the close of 2017.

→ Business in the LATAM North Regional Area was up nearly 40 percent in 2017, ending the year at 1.8 billion euros. Mexico, with an increase of 65.2 percent – mainly due to the renewal of the Pemex policy – contributed just under 1.2 billion euros. Panama was another major contributor, with premiums of 218 million euros (+4.3 percent), and the Dominican Republic contributed 125 million euros (+5.7 percent).

→ The North America Regional Area closed the year with premiums of almost 2.6 billion euros (-3.6 percent). In the United States, premiums eased 2.6 percent to 2.2 billion euros. MAPFRE is currently reorganizing its business in the USA to optimize its structure for profitable growth and concentrate operations in fewer states.

→ In the EURASIA Regional Area (which comprises operations in Europe—except for Spain and Portugal—the Middle East, Africa and Asia) premiums totaled 1.9 billion euros (-5.1 percent). Turkey was the largest contributor (653 million euros), followed by Italy (471 million), Malta (351 million) and Germany (311 million), where MAPFRE has been operating under the VERTI brand since June. The ABDA business (Indonesia), in which MAPFRE has a controlling stake of 62.3 percent, was incorporated into the Group in June and has contributed 44 million euros since then. All of the markets mentioned are also enjoying excellent progress in profitability.

Reinsurance premiums remained stable in 2017, ending the year at 4.2 billion euros. The business performed strongly, producing a profit of 163 million euros in spite of the impact of the disasters that occurred in 2017 on its income statement. However, this naturally pushed up the combined ratio (+0.8 percentage points), which now stands at 94.8 percent.

Meanwhile, the Global Risks Unit saw 3.7 percent growth in its business over the course of 2017, reaching premium volume of 1.3 billion euros. Nevertheless, as the unit most affected by the natural disasters, with an impact of 77 million euros on its income statement, it ended the year with a negative result.

The Board of Directors has agreed to propose to the Annual General Meeting a final dividend against the 2017 results of 8.5 euro cents per share (gross). The total dividend against the results for the year will therefore amount to 14.5 euro cents per share, giving a return of 4.9 percent on the average share price for 2017. Accordingly, MAPFRE will pay its shareholders 447 million euros against the 2017 results, the same amount as the year before, allocating 63.7 percent of earnings to dividends, thereby meeting its objective to maintain a payout of between 50 percent and 65 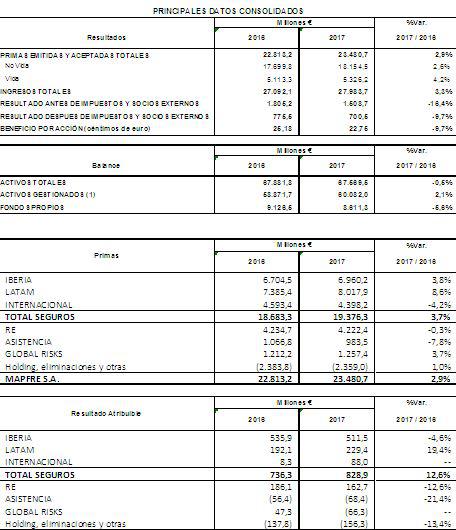 Details regarding the definition and calculation of the Alternative Performance Measures (APM) used in the report, which refer to financial measures not defined or included in the applicable financial reporting framework, are available on the following website: https://www.mapfre.com/en/financial-information/

Thanks to the efforts of all the volunteers, we delivered more than 100 food purchases to needy families.

END_OF_DOCUMENT_TOKEN_TO_BE_REPLACED

The patient can be evaluated and treated by a physician or certified nurse from the comfort of their home.

END_OF_DOCUMENT_TOKEN_TO_BE_REPLACED

At MAPFRE we are present in any circumstance.